My 14 Favourite Beaches to Visit near Cape Town

Special Date Ideas to Enjoy Around the Western Cape

Cape Town beach-goers are blessed with a wealth of glorious beaches to choose from, starting with the picture-perfect Blouberg to the glamourous Camps Bay, but my favourite by far is the quartet of granite boulder-strewn Clifton beaches, with their frothy, nippy waves that kiss the sandy, pristine shoreline, as yachts frame the seemingly endless horizon and rest serenely upon the breathtakingly beautiful turquoise waters.

Though the four beaches – respectively known as: Clifton 1st, 2nd, 3rd and 4th – share similar surroundings, they each attract their own group(s) of beach-goers and accompanying range of outdoor activities.

Visitors from the Mother City can snake up the, at times, steep Kloof Road and make their way past Table Mountain and Lion’s Head (and more distantly, Signal Hill) and then, round the corner on what is undoubtedly the one of Cape Town’s most gorgeous stretches of inhabited coastline, as they are simultaneously greeted by the shimmering Atlantic Ocean off in the distance.

From there, you can easily curl down towards Camps Bay Drive, which feeds into Victoria Road and if, fortunate enough, you can even snag one of the highly sought-after, roadside parking spaces found along the M6 and make the short walk across the road – or alternatively, park inside Clifton’s inner parking lot – and onto the narrow, treed-up wooden walkways and sandy stone steps (note: mind you head and your step…) that writhe down to Clifton 4th, past a few trendy, sea-facing homes that protectively encircle Clifton’s beaches.

Then you find yourself in the more secluded of the four beaches, Clifton 4th, the biggest and most popular among family groups. It’s my second favourite of the four and is the proud and deserved recipient of the ‘Blue Flag Status'” for, according to www.capetown.travel, “adhering to stringent international environmental standards,” and which offers: “excellent facilities including public toilets, changing rooms and places to buy cold drinks and snacks.”

There to provide some added peace of mind, and ensure visitiors’ safety, are the on-duty lifeguards – presumably from the Clifton Surf Lifesaving Club – near at hand (most especially on weekends and during peak times when the Clifton beaches teem with sunbathers, children at play and surfers alike), and though swimming in the nippy Atlantic waters – so deceptive with their tempting beauty that lures you closer to the water’s edge – is safe enough (if you can brave the often freezing water temperature, which, even in the height of summer, is decidedly cool and refreshing to put it lightly…), apparently “one should never underestimate the undertow.”

You also have the option of renting sun chairs and umbrellas (when I visited last year and enquired after the price, it was R50 for each) for the day, it is advisable to bring your own beach kit with from home and you can also buy snacks and drinks from friendly vendors that stalk along the shoreline.

Aside from the expensive, sea-facing beach mansions – rather aptly dubbed ‘Millionaire’s Row’ – that loom just above Clifton’s beaches, this stretch of beach is similar to Simon Town’s penguin-haven Boulders, with its granite boulders and outcrops that rest in the water and on the clean white sand alike. These are fun to explore or even sit on and do provide some further wind-protection, as well as noticeably and rather uniquely dividing each of the four beaches from the next.

It’s all this and more that captured my heart upon my first visit to these beaches last April but perhaps another reason I love them is down to the fact that Lion’s Head lies ‘just beyond’ and seems to almost guard these secluded, little beaches, whilst the Twelve Apostles stretch behind further along. (Camps Bay has better views of the aforementioned mountain range and in truth, I love it for its own reasons too and in the past, have had even more fun exploring it than I have Clifton.)

Clifton 3rd comes next and, along with the nearby Clifton 2nd, is also family-friendly, though it’s somewhat more popular among 20-somethings and gays, as well as active beach-goers with regards to Clifton 2nd. 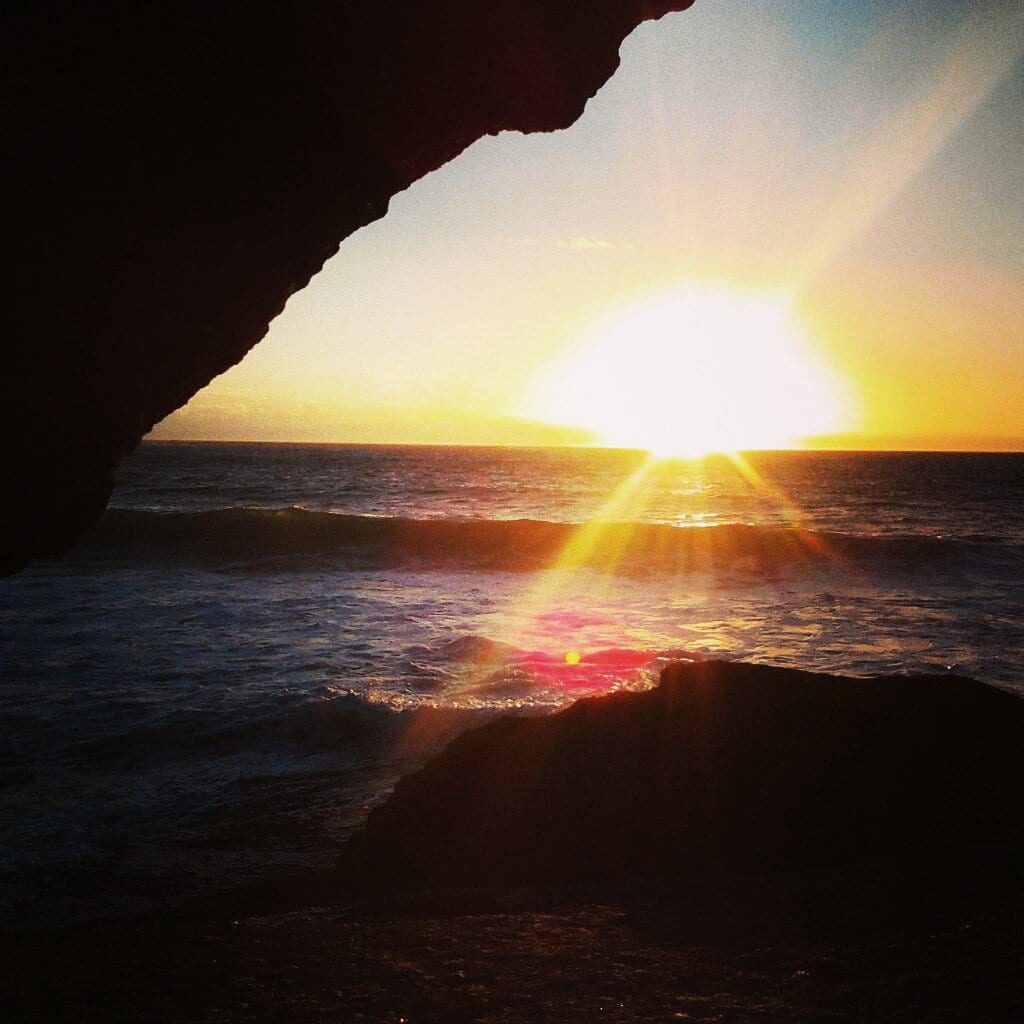 However, Clifton 1st, the last and smallest of the beaches and closest to the mansions by far (some people may find this intrusive but I don’t and I’m a rather private person… After all, it seems unlikely that the residents who live nearby sit in their homes, peering out at beach-goers when they have such spectacular ocean views to enjoy instead 🙂 ) but it is my personal favourite because, along with Clifton 2nd, it is less crowded, and more entertaining as outdoor activities such as: volleyball, Frisbee and surfing are popular here and I like watching these from a safe distance.

(Another fun bit is that there’s more sparse shrubbery and even bigger boulders tucked away in the corner of Clifton 1st.)

The first time I visited here last year, in mid-April on a gloriously hot autumn day, I came to rest at Clifton from nearby Camps Bay, which is merely 15-20 minutes walk along Victoria Road (with MyCiti and mini-bus taxi stops along the way; the excellent MyCiti buses can safely take you from the Mother City’s Civic Centre right to Clifton- and Camps Bay’s beaches – and back and this is usually how I travel there… and an added bonus? The drive is even better in a bus!) past the neatly trimmed bowling green, and I thoroughly enjoyed my solitary stroll.

During the day and even towards late afternoon in summer, this is perfectly safe but I’d advise being more cautious in the attempt after dusk has fallen.

That’s another important thing to mention… Whilst Clifton is blissfully quiet and lovely after sunset (it’s also damn stunning during sunset and is a popular sundowner spot – with good reason! The Cape Town sunsets I’ve experienced here are second only to those viewed from atop Lion’s Head), especially when the only lights are those from the nearby homes and the thousand stars, mirrored upon the surface of the restless waters, that adorn the night sky above, it’s advisable to be on your guard and be vigilant when it comes to your safety, as, even when the main crowds have filtered off back home, there are always small clusters of people around, with many gathered around open fires on the beach.

Although these beaches are undoubtedly some of the most trendy and chic the Mother City has to offer, entry is free and the beaches are open to all members of the public all day, every day irrespective of the season.

And don’t make the mistake of assuming that only the wealthy and the glamourous are welcome here… that is far from true! I have seen people of all budgets, races and sizes happily enjoying these beaches as a collective whole and thus, they are in no way pretentious or intended for a select few.

Celebrities, tourists and everyday folk (and in early mornings and late afternoons, four-legged companions too from what I’ve seen on my second and more recent visit to the beaches this year during the end of summer) alike can and do enjoy these beaches and I hope that you will too!

I have strolled along the shoreline, splashing up to my calves in the chilly waters as I snapped away on my smartphone’s camera and collected pretty seashells, offered up by the crashing waves, and believe that, although the waters are indeed pretty cold year-round, (although during summer and even early autumn on unseasonably warm days, it feels more refreshing than cold) I think I could brave the waters enough to swim in them too. I also adore the fact that the beach sand is clean and easy to dust off, unlike grainier beach sands found elsewhere.

For these reasons and so many more besides, I’m looking forward to returning in spring to once again enjoy all the beauty and tranquillity that South Africa’s so-called very own ‘St Topez’ has to offer. (And to check out what I took for a nearby restaurant, as seen from the parking lot on my way in and out.)

Another point of interest surrounding the Clifton beaches is the ‘1st Sunday of the Month Swim’ where intermediate- and novice swimmers alike can meet at Clifton 4th on the first Sunday of each month during June-September (the swim starts at 9:15 a.m. from September to August and at 10:15 a.m. from June-August).

Started in 2006 with a handful of swimmers, it reached 157 participants as of March 2011 and continues to grow both in popularity and numbers.

According to www.savenues.com: “The route is approximately a nautical mile, whereas the crossing is 7.5km/11.5km,” and participants will “have an introduction to cold water and deep water swimming.”

Though I think you’d have to be pretty crazy to brave the icy waters during those months, it sounds like a pretty fun idea all the same – though I think goggles, a swimming cap and a wetsuit are all advisable.

Once you’ve finished at Clifton, you can either take the same route home or carry on along Victoria Road and follow the road’s bend into Bantry Bay, Sea Point and Three Anchor Bay beyond, back into the city.

I hope that, if you haven’t yet checked out these fabulous beaches and you’re close to Cape Town, then you will as soon as possible – after all, we’re on the right end of winter now and before too long, things will start heating up again. 🙂 In the meantime, you can still enjoy a stroll along the beaches, catching waves or watching stunning winter sunsets.

For more info. on the Clifton beaches, you can contact Cape Town Tourism via email on: info@capetown.travel or telephonically on: +27 (021) 487 6800

Many thanks to www.savenues.com and www.capetown.travel for the additional info. used in this travel post; photos are entirely my own.

Happy Earth Day, everyone. This year's theme is Re

Hi all, . It feels like it's been a while since I

The past three days in Cape Town have looked and f

Last night, on the 50th anniversary of the Stellen

In 2021, the Stellenbosch Wine Routes celebrate 50

I am so happy to share my picnic review of Hazenda

I wish I could feel this relaxed every day... But

Today, we enjoyed the most deliciously glorious af

Things have been a bit quieter on here lately... L

The Western Cape is famous for its charming small

I have been self-isolating the past while so I co

If you are looking for a fun, safe outing for the

I finally got round to wrapping up my picnic photo

Ever since I was 14 years old, I have annually par

Although so much is still uncertain with COVID, I

Not a travel post but still related in a sense: .

This past weekend, we had the immense pleasure of

Hi all, it's been a while since I gave a little in

My latest blog post is live on the blog. Because I