Found along the M14 road between Big Bay Beach and Table View Beach is the breathtakingly situated Blouberg Beach, otherwise known as ‘Bloubergstrand‘.

‘Blouberg’ is an Afrikaans word that, directly translated, means ‘blue mountain’. This is a most apt name for the Northern Suburb area where this beach can be found, as from here, the famous and well-loved Table Mountain does indeed look beautifully blue.

The beach, with its spectacular backdrop and surrounding ocean views – which, due to its often windy conditions, makes it extremely popular for kite- and windsurfers alike – has the most beautiful, clean stretch of white sandy beach and interesting rock pools, found in the corner of the beach.

Blouberg Beach is highly popular among Cape Town residents (as well as among local artists and photographers for paintings or various kinds of shoots) due to the wonderful views it affords one of Table Mountain, a look in on Table Bay, as well as crashing white horses just offshore and Robben Island, which is roughly 6.9 km west of this part of the coast, thus making it easily visible from the area to the naked eye. 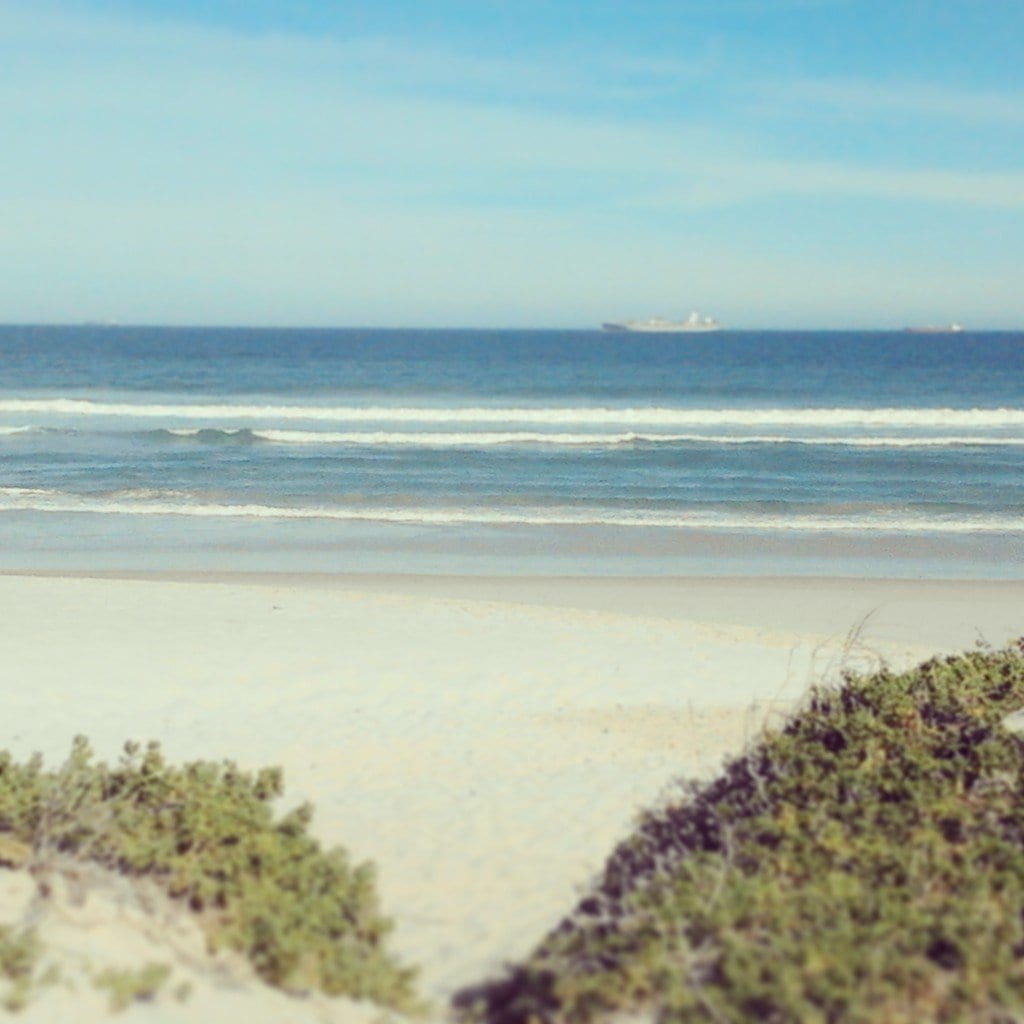 Due to the Atlantic waters, especially, the Benguela Current, the ocean is pretty nippy and it is mainly different kinds of surfers who choose to brave the waters here.

Blouberg, with its picture-perfect views, can often be seen in glamourous brochures, advertisements or on postcards with the waves crashing over its rocky outcrops (home to black mussels) and Table Mountain looming majestically in the background.

Further along, one encounters Big Bay and the nearby Blaauwberg Nature Reserve, which has its own Environmental Education Centre.

The Centre exists over the historic battleground whereupon the British defeated the Dutch in 1806, thus reclaiming their control of the Cape Colony, in the Battle of Blaauwberg.

There are also a few monuments to be found in the area, including the national monument known as ‘Ons Huisie’ (loosely translated, this means ‘Our Little House’) and the Heather Bam Monument, in memory of Heather Bam who drowned off the point in 1911.

Blouberg falls under a Marine Nature Reserve and, as such, the extraction of Cape Rock Lobster and abalone (known locally as ‘perlemeon’ in Afrikaans) is strictly prohibited.

When the season is right, you can often see Southern Right whales, Humpback and Haviside’s dolphins, Cape Fur seals and occasionally, Killer whales from the bay.

The beach is a great place to take a stroll along the shore, walk your four-legged friends or let the kids explore (especially with its little rock pools) – weather-permitting, at any rate.

Although it can get very windy (I was there on a morning of the Easter Weekend last year and it was pretty blustery but still amazing to experience) on the beach, it’s really beautiful and worth braving the elements for on virtually any given day – just try pick a calm one if you think you might be put-off by such conditions!

From the beach, you can also look back at Table View and Milnerton.

Nearby Big Bay is another great stop – it is here that the area’s White Mussels are extracted from the sand using a process known locally as ‘jiving’.

Blouberg Beach – and the lovely restaurants and cafes that overlook it – is, hands-down, one of the best places to enjoy either sunset or sunrise at.

Recently, I had the pleasure of watching the sun set as windsurfers and beachgoers enjoyed the dying light of a beautiful autumn day. 🙂 It is decidedly romantic and visually stunning to say the least and the views are unforgettably beautiful!

Then again, it’s pretty much impossible to take bad photographs here, irrespective of the weather or time of day.

Blouberg Beach is a very popular place to visit and attracts a large number of visitors almost every day for good reason.

Personally, it’s still one of my top three Cape Town beaches –  the views are quite unparalleled – and although I tend to favour the aqua-blue waters of, say, Clifton Beach more strongly, the crashing deep-blue Bloubergstrand waves are quite something to behold.

(Blouberg is also a really lovely Cape Town suburb both to visit and to reside in and is only about 25 km away from the  Mother City’s bustling centre.)

Many thanks to http://www.uncoverthecape.co.za and the ‘Bloubergstrand’ Wikipedia homepage found on the http://m.wikipedia.org site for the additional information used in this post.